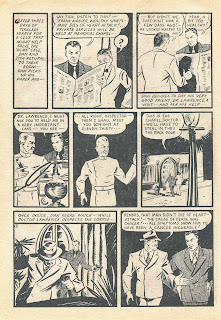 No, this isn't a black and white reprint; Centaur was still having financial difficulty at the beginning of 1940 and could not afford to put color on every page.

Dan Dennis shows you that G-Men did not have to observe rules or laws in comic books. Here, rather than getting a warrant for an autopsy in a sterile medical lab, Dan sneaks a complicit medical examiner into a private funeral home and has the examiner perform one in the dark. Interesting verdict on that autopsy -- unless it was skin cancer, there would be no outwardly visible sign of cancer. I wonder how much cutting up the examiner did.

This is Ed Colton. It's interesting how many similarities there are between this scenario and the Masked Marvel story I shared from yesterday, despite that being a mysteryman story and this being a cowboy story.

Ed lays out a good series of clues that can be gathered at a crime scene.

In order to pull off this bluff, Ed took a deliberate 10' fall into a gulch in order to look injured.

I guess there were not too many ranches with plane hangars in the area, so solving the "who done it" part of this mystery was relatively easy. Finding one of them conveniently holding the murder weapon in the hangar certainly helps.

By making it a tripod-mounted weapon, the Editor has made it virtually impossible to use in melee range, to Ed's benefit.

I laughed at first when confronted with the term "liquid oxygen," but it is a real thing and has apparently been used in rocket fuel in the past.

Of course, the caption is way too long, taking up an entire panel, and includes a lot of detail we just do not need to understand the story.

This is Dean Masters, D.A. There are three ways to handle that trick where he sneaks the tear gas grenade out of his pocket. The player could either make a sleight of hand check (basic skill check) to palm the grenade, rely on surprise rolls, or even just rely on initiative rolls to see if he could set it off before Louie could take an action. 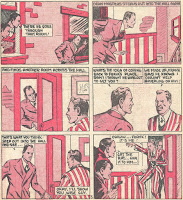 Dean tricks Sam into going out into the hallway and getting shot. My first inclination was to say Sam had to save vs. plot to resist fast-talk, but there's not really anything here to resist. Instead, I would say this is an encounter reaction check situation.

Dean wisely doesn't fire into the crowd -- if he rolls low, he runs a risk of hitting a civilian (there's no game mechanic penalty, by the way, for shooting a civilian, but there could be in-game repercussions, like him losing his job.

Sam takes three bullets before he goes down. With those hit points, he must be a master criminal!

This is Captain Forsyth & Sergeant Maclean, Spy Hunters -- a title almost longer than its own feature. Here, we see bandits. We are told they are Arab bandits, but counter to typical racism of the day, there are no visual cues to the bandit leader being an Arab, other than a caption telling us.