We return to Centaur's Funny Pages with a new lead feature. Though signed "Richard Bruce," this is believed to be more early work by Plastic Man's Jack Cole.

Here we see a rare origin story for a magic-user. We get a sense that becoming a magic-user is itself dangerous, perhaps even requiring a save vs. poison!  In Supplement I: National, I used the snake bite panel to illustrate the Snark Charm spell. The snake may have been charmed into biting Mantoka, although snakes don't always need provocation to bite.

Here, seemingly soon thereafter, Mantoka has the ability to Polymorph Self, marking him as at least 7th level.  That a 7th-level magic-user would have to run from four dogs seems unlikely, unless Mantoka simply did not want to engage them and possibly see them hurt.

The electric eye trap is our first indication that this is modern day.

This is a really nice page, with a surprisingly P.C. representation of an Indian as an intelligent, modern man, who doesn't need magic to embarrass a racist.

Then Mantoka seems to use the spell Stoneskin on himself, unless it's a magical variant of the Super-Tough Skin power.

Straining your arm is not linked to any game mechanic, but is flavor text.

Mantoka uses a Gaseous Form spell to escape, then uses Burning Hands (even more literal than the D&D version) on the mine guard.

Mantoka gets felled by a head blow. 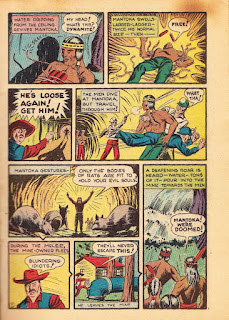 Mantoka was only stunned, because no one recovers from full unconsciousness that quickly in Hideouts & Hoodlums.

Being tied up does not hinder his spell-casting, since he seems to have cast Enlargement on himself. Unless, maybe he actually used the wrecking things mechanic on the ropes and enlarging was flavor text.

Mantoka then uses either some new intangibility spell, or maybe an illusion to fool the guards, and then casts a Mass Polymorph spell that turns three men into rats. That's got to be a 6th level spell, meaning Mantoka has ten brevet ranks to cast it! In Supplement I, I used that panel to illustrate the Reincarnate spell, though it does not really match it well. 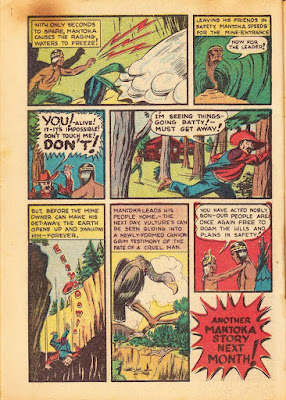 Freezing the flood was either the work of a Control Water spell or maybe a Cone of Cold spell. In Supplement I, I used that panel to illustrate the spell Ice Storm.

Now we move on to The Arrow.

We should not be surprised that The Arrow can kill motors and smash guns to bits with his arrows; we have already seen evidence that he should be statted as a superhero, and is using the Wreck at Range power here.

What's puzzling here is the first panel -- what is going on when they hit the blank wall? Did The Arrow teleport out of the way? Project an illusion of himself being in front of that wall? Or is this skill-based, and he hid in shadows?

That the Arrow is able to take out a thug (generally 2 HD in H&H) in one punch suggests that he is buffed with the Get Tough power. Hitting four men in one turn suggests he is also buffed with the Flurry of Blows power.

This is Mad Ming, though you won't see any evidence of Mad Ming on this page. Gene is a G-Man, Jinny is his ...girlfriend? The old man is a plot hook character, possibly also a supporting cast member (we'll have to see if we see more of him after this). The old man fails his loyalty check and refuses to go down into the hideout/haunted cave.

Jinny's response includes the unusual phrase "Not much!" when she means "No way!"