Phew! Some of the copy of this issue from Quality is of, well, poor quality!

From this page of Joe Palooka that I can read, I see some prices listed. Now, I am highly skeptical of the $3 offer for a used camper -- I suspect Ham Fisher had a really bad experience with campers -- but more interesting to me is Knobby's accepted offer of $10 for car repairs. So much cheaper than today!

I started out thinking that Porto Bello was a joke about mushrooms, but it turns out that Porto Bello is/was a real place in Panama. Panama was controlled by Spain when this took place, but note how not only does everyone there talk in English, but even the signs are written in English.

The phrase "pike ye the dandy" is an unusual one, as I've never seen "pike" used to mean trip before, but it clearly does here.

Ripping right through this issue, we're on Rance Keane already. And speaking of tripping....Even braced, I have trouble believing that Rance could trip a horse like that; surely, the horse's strength and mass would just pull Rance off the roof. In this instance, I would treat it as an opposed grappling attack, even though Rance is not in melee range. If the horse wins, Rance gets pulled off the roof and lands for 1-6 points of damage; if Rance wins, the horse gets pulled over and is prone. I might even give the horse a +2 situational modifier. 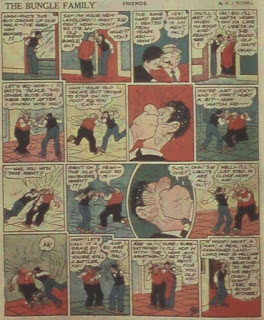 I haven't featured The Bungle Family in a while. Here we see George Bungle taking two good smacks to the kisser, each of which should be doing 1-3 points of damage, and walking away from them. He must be a bit of a scrapper; possibly a 1st level fighter with max (or near-max) hit points.

The ineffectiveness of bare knuckle punching in Hideouts & Hoodlums' current edition bothers me. It's realistic, but leads to no one wanting to fight without weapons. I've been thinking about introducing graduated punching damage, so that they do 1-4 points of damage starting at 2nd level, 1-6 points starting at 4th level, 1-8 points starting at 6th level, and so on.

This is The Clock.  We've seen Heroes be able to boss around beat cops before, but never with an excuse this flimsy -- based purely on having been Captain Kane's driver, The Clock is able to wander around the crime scene and pocket evidence.

With little confidence in their new feature Dollman, we find this installment pushed towards the back of the book. The "monsterous machine" is an aquatic tank. 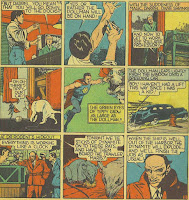 This is why I don't like rats -- you never know when they might have dynamite strapped to them. This would also make for a really dangerous encounter! 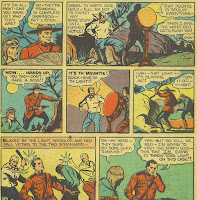 This is Reynolds of the Mountains. The bright light blinds them during a surprise attack. Then they lose initiative and receive lucky head blows. Had they won initiative, they could have still tried to attack first, but would have done so at a penalty. 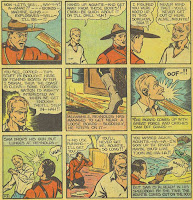 Most of this checks out. The floor board is an improvised club, so that does 1-3 points of damage, but that's enough to trigger a disarm check. More curious is how Reynolds misses Sam. Even assuming Sam is at medium range (that's -2), Sam is wearing no armor, has no cover, and isn't moving fast enough in an accelerating speedboat to get more bonuses -- that gives Sam only slightly worse than 50/50 chances of hitting, better if he's higher level already. I guess he just really got an unlucky die roll!

(Scans courtesy of Comic Book Plus.)
Posted by Scott at 10:06 PM