It's a pleasure revisiting the early Smash Comics for Will Eisner's Espionage, second only to The Spirit in the Eisner ouevre, in my opinion.

Black X has his original name back now and is no longer being called Black Ace. This page is interesting because it seems believable enough that it could be real history, only it's not. As far as I can tell, this "Caldwell Line" is a clever fabrication.

We've seen Batu's illusions before, but this is the first time it's been explained to us that his illusions last after he stops concentrating on them for a short while. None of the phantasmal spells, up to 3rd level anyway, explain this benefit.

This page explains that Black X can be overpowered by five-to-one odds (even though it looked like he was only fighting two guys on the previous page).

We get another example of a fighter (or a spy, if using that 1st edition class) wrecking bonds.

Black X looks like the tension is really getting to him, but the guys in the planes are doing most of the work here. Is Black X still guiding the adventure at this point? It's his positive encounter reaction check that gets the coast guard to believe him (unless he gave them some secret password we missed). One could also argue that it's Black X's expert navigational skills that save the day, meaning he must have succeeded at a skill check here. With the skill check, the pilots were only looking for  concealed torpedoes instead of secret torpedoes. 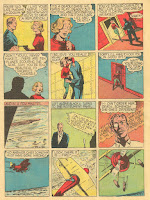 Morale dilemmas are so rare in these stories, but is Black X making this decision of his own volition? Could a femme fatale compel a Hero who fails a saving throw to act against his interests, like a Charm Person spell?

This is a huge detour from real world history that is ignored by next issue.

It will be interesting to see if the next installment really follows this and takes place in Chicago.

This is Abdul the Arab. This is a kind of clever way to tell when someone shows up for your super-secret meeting in disguise. Turned out to be important!

This story would be mundane if not for two details: 1) the villain is using ventriloquism and 2) in addition to money, the villain wants a specific gem. Why that gem? There's a story.

(The real story disappoints, though; the ventriloquism is unnecessarily explained away, and the reason for the gem is stolen right out of The Moonstone.)

"He's inside the house" is a horror movie cliche, but who knew it started with this story?

First villain lair in a swimming pool. There are not a lot of other situations where books on sea diving turn out to be valuable clues.