Last time, we were about to meet the newest hero of futuristic 1997. It's this guy, Saber -- which is, admittedly, a pretty cool name for a Hero -- and you can tell he's a Hero because these U.S. government guys say so (U.S. government guys are all good guys in comic books) and because, well, he's almost naked. In addition to being athletic (high Dexterity score) and has a great mind (high Intelligence score), he has telepathy, which sounds a lot like psionics -- remember the 1st edition psionics system from Supplement III?

I would hand-wave the leaping over the desk thing; if he has enough Movement to get around the table so he could reach melee normally, I'm willing to accept the leap as flavor text. 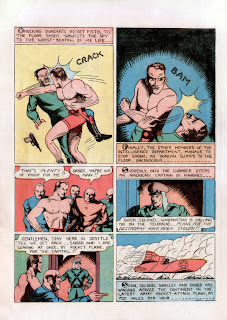 Saber is pretty vicious -- I noted that the officials have to pry him off the spy or Saber might have beat him to death. No one offers to get him a shirt or pants.

750 MPH was considered near-impossibly fast circa 1940; this speed was not reached until 1947, and not publicly known about until 1953.

"Teloradio" seems like a common cliche of science fiction, combining the television with a telephone, or webcamming, as we call it today.

It will be interesting if we see exactly what the "destroray" does exactly. It sounds like something that would have came out of G.I. Joe...

"Deland" is a strange spelling for Clinton, who was of course the U.S. President in 1997. The actual Secretary of State was Madeleine Albright, so Fight Comics got that even more wrong.

It's curious how the Alaskan uniform looks so Russian, if Alaska is under U.S. control in this future. Maybe control was only recently wrested away.

One-man submarines are as old as 1776. The submarine sled is different in that it seems to be a submersible motorboat, something we still don't have in 2018.

Still no one has suggested that Saber put on a shirt yet.

Saber's sub sled crosses the 827 miles between Washington, D.C. and Bermuda in three hours -- meaning the sled can go 275 MPH, a water speed record that was not broken until 1964, but even now never maintained over three hours.

Rewards can come in all forms for a successful adventure. Here, Saber not only gets to be head of the Super-Intelligence Department, but they give him a shirt! (The first one would come with an XP reward; the second one...not so likely.)

This is Kayo Kirby, which looks like it's going to give us a combination of the crime fighter and sports genres. Note that Kirby manages to force morale saves on the thugs only by injuring them, not by knocking at least one of them out first.

Now, this page gives me a thought...what if coach was a Supporting Cast Member type, who gave Heroes advice while fighting, and it gave them a +1 bonus to hit? That would be pretty cool (though dangerous for the coach, bringing him along into hideouts!).

In my current campaign, there's a jail overcrowding problem that my players have had to deal with in creative ways, including this one -- just letting crooks go with a warning. Not every encounter needs to end with mobsters going to jail.

And this page made me think of something I've never considered for a game mechanic. What if Heroes needed supporting cast to be present in order to fight at maximum effectiveness? Could players who insist on their Heroes being lone wolves suffer a -1 penalty to certain rolls, like attacks and saving throws? I'll have to give it more thought.