This is the original Cat Man again. From this page, we get a rare "dead or alive" bounty for $35,000 (that's a lot of xp for Lawful Heroes!). We also see that plot hook characters can turn up coming from any direction.

Cat Man uses his cat to poison bad guys. Technically, it gets around the rule that Heroes cannot use poison, though since a cat has low Hit Dice and a corresponding low chance to hit a target, it seems an impractical method of delivery.

Speaking of impractical, this character takes the age-old cliche of crime-fighting in a dress and crossdresses it. It still seems impractical, but at least a dress this concealing can hold a bulletproof vest under it. Typical of comic books, people in bulletproof vests are shown to feel no pain at all when shot. 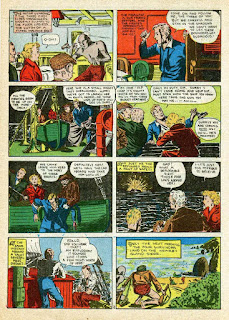 This is from the serial The King of the South Seas. First we see an unusual improvised missile weapon, and one that looks so small you wouldn't think throwing it against someone's head would knock them unconscious.

We see pirates and natives working together, which is a good combination of archetypes for variety.

Next we see a character bleeding out from a head wound who faints from it. This isn't how hit point loss works for Heroes and mobsters, but Editors have more leniency for bending the rules when it comes to plot-useful side characters.

I've no idea why the boat blows up.

The jungle island is pretty big; if the boat is being rowed at 6-7 MPH, and it takes them 30 minutes to reach their destination in the heart of the island, it means the island must be at least 6-7 miles in diameter. And this is good, because if you're going to use an island as a "sandbox" setting, you need it to be spacious enough for lots of travel.

If the coincidence of the "King" turning out to be the old man's son seems too great for your liking, bear in mind that we still don't know this is true; we only know the old man thinks it is true. Editors can always introduce false information through characters to throw the players off.

In the "future" setting of the 1950s, people use televisions to call each other. Carl Burgos is only one invention off here, as what he's posited turns out to be true later for computers.

Game mechanically, all Dr. Magno has done here is a disarming attack. If played that way, then the magnetism power is only flavor text. But it's possible to have performed this feat with a telekinesis, or a magnetic control power too (though the later would only duplicate telekinesis in this case).

There are some superhero buffing powers that would have shielded Iron Skull from that throwing knife, but it seems unlikely that he would have them prepared for a trip to talk to the police commissioner, and cannot activate them at the same time as being surprised. So, either Iron Skull is not as surprised by the knife thrower as the panel would have you believe, or perhaps the Editor has hand-waived game mechanics for this scene, since the thrower only needed to send the message and was not here to kill him.

It's remarkable that Iron Skull fails to sneak into the second floor window, so he changes tactics dramatically and noisily crashes into the basement. He's definitely buffed himself defensively so he takes no damage from the fall, and uses wrecking things while falling to go through the door.

Of course, this just plays right into Dr. Magno's hands, as his electromagnets happen to be housed right in the basement. I wonder what effect they would have had on Iron Skull if he was still up on the second floor. In the basement, the effect is essentially a Hold Person spell.

This museum keeps $50 million in jewels on display. A Hideouts & Hoodlums player playing the numbers would wait to thwart Dr. Magno until after he's stolen the jewels and the museum has put up a reward -- even a 1% finders fee would be 500,000 XP (basically 1 free level), while Dr. Magno himself is probably worth just a few hundred XP.