We come back around to Bill Everett's second best creation of the Golden Age, Amazing Man. John Aman is seen here, making the same decision one of my earlier H&H groups did -- wouldn't it be fun to go take on the Nazis?

We also see that he's not exactly a green mist when he's "The Green Mist"; he's actually invisible.

We also learn that John smokes (boo!), but looks really slick in a suit. I sure like this look more than the nearly naked look they'd give him in the comics later.

While my players took a steamer across the Atlantic, John steals onto an Army Air Corps base (if this is New York, it could be Mitchel Field, but we have no idea where John is now), steals his personal plane (looks like a flivver to me), but also two machine guns ad lots of ammo. It's a chancy, but effective method of upgrading a hero's weaponry without waiting to take mobsters' weapons as trophies.

In 1927, Charles Lindbergh showed the world that a solo pilot could reach France from New York in 33 1/2 hours.

Let's assume that John either stole synchronization gear for his front-mounted machine gun (which the narrator neglected to mention) or, being really smart, he was able to improvise one (which makes me wonder -- could inventing things become a skill check?). 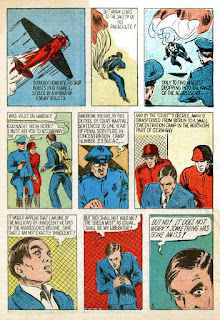 This is something I've gone back and forth on about vehicular combat. How would the Editor know when to have bullets make a plane burst into flame?  It seems that there has to be a chance of a random complication per hit.

Parachuting is a potentially dangerous business. Should it grant a saving throw to avoid falling damage, rather than automatically spare the hero from falling damage?

It's unusual to see characters actually speaking in German, instead of German accents.

Speaking of unusual, this is an unusual variation of the "take me to your leader" tactic. 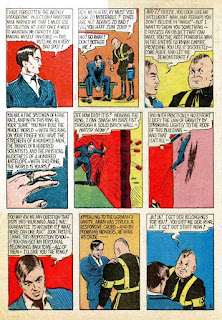 It's hard to believe John somehow forgot to prepare his most potent power before landing himself in Germany, but players do this sort of thing all the time when they're playing games where they have to prepare their characters' powers, spells, or what have you.

Here we see John demonstrating wrecking things and the Leap I power. He describes his powers as "the strength of a hundred men," (that means he can lift 5-10 tons, or the equivalent of the Raise Trolley Car power), "the brains of a hundred scientists" (I have no idea how to quantify that one in game terms), and "the physical alertness of a hundred antelope" -- and I'm not even sure what that last one means! Should being immune to surprise be a power?

The coloring is off, of course, but that is what armored cars looked like, circa 1939.

It's interesting that both the German and the French forces are wearing gas masks. Apparently they are both expecting chemical attacks from each other? John grabs a rifle, but doesn't bother with a gas mask. He is apparently very confident about his saving throws vs. poison, which makes it odd that he even feels he needs the gun. Perhaps the rifle, like the uniform, are just for identification.

This looks a lot like the 4th level superhero power Turn Gun on Bad Guy, which I'm thinking of giving the even more generic name of Missile Deflection.

The ability to wreck tanks means that John is at least 4th level. If he has access to 4th level powers, though, then we know he's at least 6th level.

Howitzers are artillery weapon/trophies in both editions of Hideouts & Hoodlums.

Normally, attacking while invisible dispels that invisibility. One could make a case that wrecking things is not, technically, an attack.

As a reminder of how ruthless Amazing Man can be, he killed the pilot before commandeering the bomber. Granted, it was a Nazi pilot.

(Scans courtesy of Comic Book Plus.)
Posted by Scott at 9:56 PM