Although The Arrow was Centaur's first attempt at making their own superhero, The Masked Marvel was their first obvious attempt at duplicating Superman. MM had super-strength, leaping ability, and mind-reading to boot!  What set him apart was that he had operatives, a secret headquarters, and super-science gadgetry more like the pulp heroes.

He might also be the first non-cowboy hero to be based out of a southwest state. 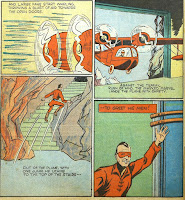 It seems to me that the U.S. Navy came up with much simpler arresting gear for aircraft carriers than this strange method of blowing on a plane so it comes in slower. The real purpose of this page was, of course, to show that The Masked Marvel could leap around like Superman. Well, not quite like Superman, since this seems to be only a 20' leap or so. Clearly only the Leap I power. 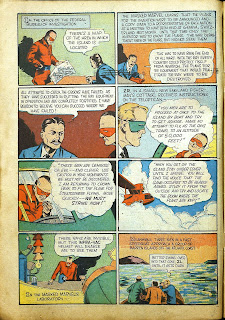 There are quite a few hi-tech trophies on display here. The "teloptican" seems to be a miniature two-way television with a range of hundreds of miles.

The "infra-vac" helmet allows the wearer to see invisible rays (and presumedly other invisible things).

The ray being talked about has a range of 50,000' and nothing mechanical or electrical can move through it without ...well, it isn't clear yet if the machines just stop working, if they blow up, or what.

Also note how the FBI have a map for MM to use to get to exactly where he needs to go. No investigating necessary in this scenario!

900 MPH would be faster than any plane could fly in 1939 (planes could only break Mach 1 in power dives). Interestingly, 30,000' was achievable in 1939, and had just been accomplished by Jackie Cochran, the first woman pilot to reach it.

Oxygen pills seems to need to be a thing in Hideouts & Hoodlums.

What kind of psychic power is MM using to learn his operatives are in danger? There is a power I introduced in Supplement II called Sense Friend in Need, but I hesitate to give it a range of 55,000+ feet...

The ol' trap door under the "welcome mat" trick!

MM appears to be using the Aviator stunt Wing Walking, but straightening out a rudder with his bare hands sure doesn't seem like a typical aviation stunt. Could that just be a reversed application of wrecking things? 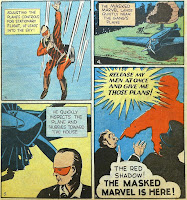 I'm not sure what to make of this page. Is MM using some form of psychic shadow projection? An illusion spell? A projector and ventriloquism? Whatever it is, it really seems to break their morale. Maybe it's just a manifestation of the power Scare Bad Guys?

The Masked Marvel seems to be at least a 3rd level Superhero, probably 4th or 5th, with a few levels in Scientist as well.

This is Gabby Flynn. After inspecting a crime scene, he wisely starts questioning people to get clues fed to him. The Editor might have pre-prepared a random rumor table for this scenario, or could wing the answers, judging on the spot how much he wants the players to know.

I have some players who play like Gabby. Unhappy with having to look for clues, find a motive, and stuff like that, Gabby would rather just punch his suspects and see how they react!