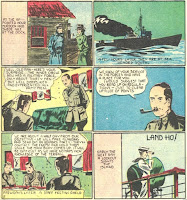 And we're back to The Inner Circle, where we see the players have figured out that, if they pool all their supporting cast members together, they can form a military force of 30 men -- or more (depending on how high their Charisma scores are)!

But then this page shows us the disadvantage of having too large a fighting force on your side, as they easily take the "Mafio" island without any challenge or suspense. The Editor could always up the challenge level they encounter to match -- maybe give the Mafio some heavy artillery of their own -- while other Editors might feel that is cheating and run their scenarios as-is.

This is the first I've ever seen of Tippy Taylor, which is odd because it seems so tailor-made for Hideouts & Hoodlums conversion.

First we get a lot of establishing of a real world setting, with references to place (Metropolis, California, Mt. Arrowhead) and time (topical reference to Amelia Earhart's disappearance).  This is the first mention of a city named Metropolis in comic books and, while Mt. Arrowhead is fictional, there is a Lake Arrowhead in California.

The scenario really starts when Tippy and Hunk wash up on the island -- everything before it could be backstory read to the player at the start of the game. The dinosaur gains surprise on them, but has a neutral encounter reaction to them and does not attack.

Here we see more sauropods, apparently of different species, all socializing together. The dinosaur chasing Tippy seems to be more curious about him than hostile -- which is very good since Tippy is probably no more than a 1st-level fighter!  We also see that dinosaurs -- or at least sauropods -- do not run faster than humans (but not slower either).

This is interesting because we don't often see Heroes failing skill checks. It's so necessary for the plot that he fall in that pit, though, that it makes me wonder if the Editor did not fudge the results against him -- bad form, I say, favoring story over the dice. Or perhaps there are multiple ways to reach the underground lair, and Tippy just fell into the first one.

Wax statues of guardians seems like a good trick to put in your hideouts.

Well, it turns out they aren't just wax dummies after all, but androids waiting to be turned on!

The old man's recipe for activating androids is a quest worthy of an entire mini-campaign.

Tippy gets a free ride to the next destination on his quest on the back of a gryphon! I'll have to include a note that there's a chance they can talk.

(Scans courtesy of Comic Book Plus.)
Posted by Scott at 11:57 AM