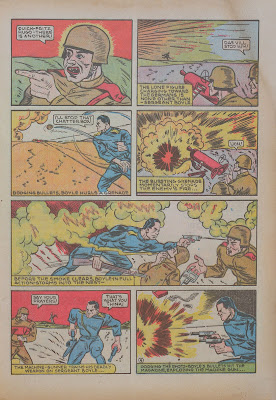 We return to Sergeant Boyle.  Charles Biro would soon go on to do great things in comics, but like Jack Cole he was still finding his bearings on this feature.

Boyle's ability to dodge bullets, normally not possible at human speed, demonstrates how all classes should get the save vs. missiles to dodge gunfire.

There are two unexpected occurrences on this page that could affect game mechanics. One is the notion that anti-personnel weapons could also create concealing smokescreens, making grenades extra desirable for Heroes.  The other is the notion that artillery weapons are so combustible that they can be shot and made to explode. I like that notion, and may cite this as an example the next time my players want to cart a machine gun around with them.

It's also worth noting how graphic the violence is on this page; even from the beginning Biro was pushing the envelope there.

Could deciphering code be as simple as an expert-level skill check? Yes, I think so...

And this is interesting -- I can't think of other examples of grenades being used as distractions before. I'm not sure if my players would ever toss away a grenade like that instead of just choosing to blow bad guys up. 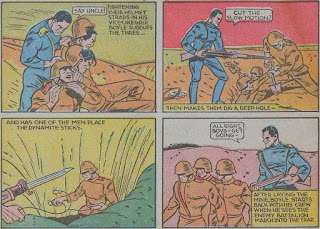 Aha -- the reason he didn't blow them up was that he wanted to make them do his digging for him!

And no, I would not allow someone to make three grappling attacks at once. In fact, in my campaigns, you can only attack the same target with multiple melee attacks, though that is not an official H&H rule.

This feature is Queen of Diamonds. The author is, supposedly, novelist Manly Wade Wellman, who must have just been cashing in a paycheck here. Rocket is here in the Land of Diamonds to woo their queen, but immediately turns completely subservient to her, anticipating a sort of reverse Gor.

The lion is knocked out with two punches.  I made punches pretty weak in 2nd edition to go with realism, but I definitely erred in staying comic book-authentic.

In true RPG fashion, Rocket doesn't stick with his fists because it fits his character concept, but picks up new weapons and armor/cover from battle to battle.

In the end, he is rewarded with the queen as a Supporting Cast Member, and also a title. The SCM is already worth XP, because he can earn XP for including her in his future adventures. I would award a one-time XP award to go along with earning the title. 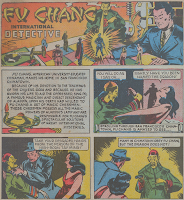 Apparently also written by Wellman, according to comics.org --  I would like to have had a conversation with Manly about how a Chinese magician managed to be a direct descendant of Aladdin. Sometimes, not a lot of thought went into these stories. In fact, to get a real Golden Age feel to your H&H scenarios, it might be better to plot them out as fast as possible and avoid overthinking anything.

So Fu Chang, through the aid of the ghost of an old wizard, is able to animated his magic chess set and send them out to spy on people. This could be elaborate flavor text for a Clairvoyance spell...but I think what we're actually seeing are the first Figurines of Wondrous Power in H&H. 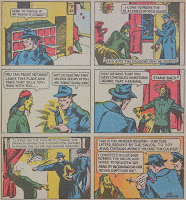 This figurine grants the Find Evidence power to anyone holding it.

And such convenient evidence too, pinned to the wall behind a curtain (who pins envelopes to walls??).