When Wambi's elephant can't solve all his problems for him, he has to recruit a whole army to help. But at least he gets a reward in the end for alerting them. He may have got little or none of the XP from the fights he avoids, but at least his reward XP is all his. There are surprisingly few examples of rewards being given in golden age comics so far, so it was good to see this one. And now Wambi has a silver sword he can fight werewolves with!

This whole comic book was pretty racist, but White Hunters of the African Safari takes it up to 11. If you can muscle through it, there's some things worth pointing out here.

First, a rare example of lighting conditions affecting missile fire (or at least Slim thinks it will have an effect).

The girl in the background is going to be offering running commentary on what she feels are each of the white hunters' best attributes. Here she comments on his Charisma. 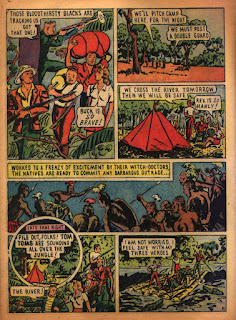 Here she comments on how brave Buck is. That's a hard thing to quantify for hero characters, because they aren't subject to morale saves like non-hero characters are. But what really interests me is how "Rex is so manly." There is no game mechanic for manliness -- and yet, it would make a lot of golden age sense if there was. Now I just need to give more thought to what a manliness attribute would be like and what it would give you a bonus for.

Also of interest here is a rare instance of camping for the night and setting up watches -- staples in fantasy games, but a rare sighting in comics.

The wandering encounter with crocodiles is surprisingly glossed over as nothing. What level are these guys?

This is Simba, King of the Beasts, which is funny because of the Lion King connection. It's not a bad story -- maybe even the best from this issue -- but I call your attention to this page because of how experience gives Simba the ability to avoid damage. I think that's one of the best explanations I've ever seen for how hit points work; they are not a quantification of toughness, but a measure of one's ability to avoid getting hurt.