Black X/Ace doesn't have a clue where the saboteurs are, but he gets a "hunch" that seems to come out of nowhere. I actually wrote a game mechanic for the never-played Detective class that allows him to get a clue from the Editor.

The fight here with the saboteur is a mix of grappling and punching, and I've talked about unarmed combat on this blog plenty (and Black X/Ace doesn't dodge in panel 6; the saboteur just misses). What's worth noting here is that circumstances -- not anything in particular that Black X/Ace does -- forces the morale save (and that saboteur either rolled well or has a fanatical morale). 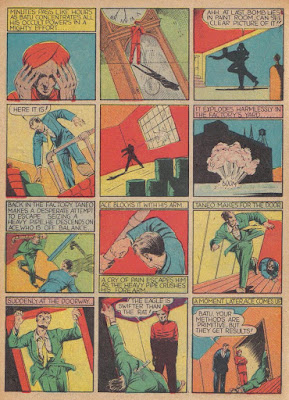 It's unclear what Batu is doing here, though it seems an awful lot like the spell Locate Object. The casting time seems unusually long, but if Batu is a Supporting Cast Member and not a Hero then the Editor has a little more latitude for changing how magic works for him. Now, the Editor doesn't have a lot of wiggle room for changing things like casting times -- once or twice to heighten tension and the players might overlook it, but used too often it will have the players rightly calling foul.

The crushed forearm is an unusual complication from an injury and, of course, one incompatible with the abstract hit point mechanic. I have talked on the blog before about adding complications for injuries for SCMs, tacked on to hit point loss, but this rule is unlikely to make it into the 2nd ed. basic rulebook now, mainly for space considerations (I'm already past page 110!). I would treat this, then, as just a knockdown/trip attack (and I do need to make sure there's room for that in my combat section) with some pretty brutal flavor text. 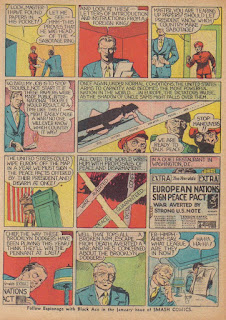 Those are some awfully convenient papers Batu finds on Taneo's body. Black X/Ace would be wise to say they were too convenient and might have been intended to falsely implicate another country. That seems a more convincing argument, to me, not to make the papers known.

This is some interesting alternate history, a dream scenario where just the threat of U.S. intervention ends wars. Future history will clearly show otherwise, that the U.S. can't ever seem to end a war in just one year.

The Chief's curious joke about what league the Dodgers were in is, according to Wikipedia, likely a reference to this: "In 1934, Giants player/manager Bill Terry was asked about the Dodgers’ chances in the coming pennant race and cracked infamously, 'Is Brooklyn still in the league?'"  The Brooklyn Dodgers had actually been in the National League since 1890.

Chic Carter is in "Moravia" -- what seems like a clear reference to the then-Soviet-controlled state of Moldova. But the "Arlbourg Pass" must be a reference to the Arlberg Tunnel in Austria. And Brennburg is a barely disguised Brennberg, Bavaria. But, if Chic's train is stopped less than 10 miles from Brennberg, where does that put him? Regensburg is the next largest city, but I believe that would be more than 10 minutes away by train. So that leaves Chic in some little way-stop village along the tracks. No wonder he thinks the place is dead!

The abduction of a Bavarian princess kind of makes sense. The Bavarian royal family, the House of Wittelsbach, was anti-Nazi, and the family's arrest after fleeing to Hungary earlier in the 1930s might have inspired this story.

Bavaria had no king, but a crown prince.

It's a bit of a stretch that the crown prince would want an American journalist's help...but, hey, if that's what it takes to give out a plot hook! 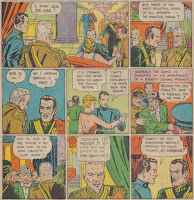 Some Heroes would investigate the duke carefully. Maybe search his home for clues. But our man Chic, he just marches right up to the duke in public and asks him to his face. It's a risky move that angers the duke into attacking Chic with a sword and implicating himself, but an encounter reaction check could have gone a lot of different ways than that.

I'm not sure electric eyes can do what John Law, Scientective, is saying they can, but it's plausible enough for comic books, and thus for Hideouts & Hoodlums.

Also, as a Hero, it pays to check under your hood every once in awhile to look for planted devices. You can never be too careful around villains!

Given how dangerous falling damage is in H&H, levitating someone 35' into the air is a pretty effective trap. Luckily the distance to the trees is shorter, though John's player must have rolled to hit to reach the trees.