After a long delay, I return to Centaur comics and the issue after the last issue of Funny Picture Stories. 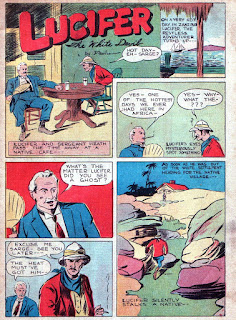 And it begins with new character Lucifer, the White Devil. Lucifer is a British soldier and...well, it's unlikely his parents named him Lucifer (we soon learn his first name is Fred, so maybe his name is Fred Lucifer).  More likely it's a nickname he's gained from having a fearsome reputation in battle.

Here, Lucifer seems to have spotted something suspicious. It turns out, the native is wearing a ring that Lucifer thinks he recognizes. But the native doesn't appear to have walked anywhere near Lucifer. Maybe Lucifer is racist enough to think it suspicious for any natives to have nice rings. Or, perhaps, the Editor wanted the native to be a plot hook character, and just announced he looked suspicious. Perhaps Lucifer's player is lousy at altruistic or even reward-driven motivators, but is motivated better by curiosity.

Now this is interesting -- we've all seen the cliche of the rope bridge that falls apart as the Heroes are crossing it, but this time we see the rope bridge has broken before the Heroes reach it! This could be a good idea for handling all traps -- roll and there's a 1 in 6 chance of finding it already sprung and someone in need of help in the trap.

This is from His Highness. I only count eight different characters in those "crowd scenes", but there are supposed to be enough anarchists here to need an army to stop. The point is that, in foreign countries, expect to encounter anarchists in greater numbers.

Apparently, even a revolution can be stopped by just a single encounter reaction roll made in the right circumstances (maybe if the Charisma bonus is high enough?).

This is from Fury of the Foreign Legion.  I'm not sure what to make of Mary Desmon's assertion that she knows Paul/Michael so well that she can sense when he's being held against his will. A bluff? A psionic ability? Childhood friend as a supporting cast member type with a specific special ability?

This is from The Dopey Kits.  By my count, gangs of half-pints can be found in numbers up to 36. Note that some of the half-pints are wearing the costumes of Barry Finn, the Arrow, and what appear to be the Masked Marvel and the Shark, as well as costumes representing other genres Centaur had published.